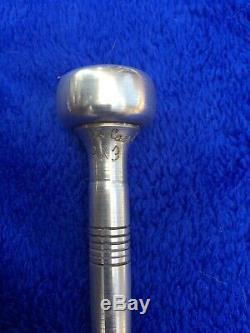 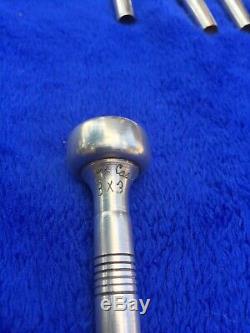 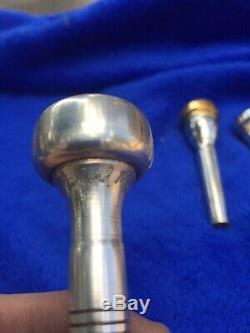 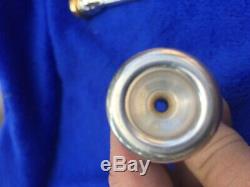 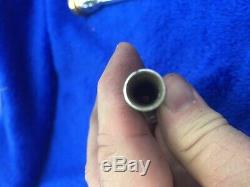 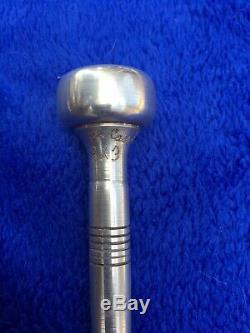 Probably the most collectable Mouthpiece I own. All original , even the plating is original.

These are very rare especially in this condition. This is an original Al Cass 3x3 trumpet mouthpiece. If you haven't heard of these mouthpieces they are widely regarded as some of the finest mouthpieces ever created. Some artists who used these at one time, or their whole career include: Dizzy, Art Farmer, Blue Mitchell, Roy Hargro. Ve, Roy Eldridge, Red Rodney and more.

The 3 series was regarded as the lead or screamer series. They are a small diameter mouthpiece with a 28 throat and a shallow cup.

The cushion rim makes it very comfortable to play and this is why they became so popular. This 3x3 is in silver plate and is at least a 5/5 in terms of condition. You won't find many still like this as these are scarce to find especially in such nice condition. Players that used Al Cass equipment per Al's son Steve Cass.

Dizzy Gillespie (2-24A Mostly, though switched to a 2-25A a few times). Don Elliott (not sure what size, just have dimensions in the book). Louis Armstrong (dizzy backbore and diz tool). Clark Terry (the Diz model).

About 1980, I asked my father why my favorite trumpet players picture, Maynard Ferguson was not on the wall in his workshop or in his advertisements? And he stated to me. Maynard would use it but he's getting paid too much to use somebody else's. His entire brass section uses them. I believe that they told my father how much Maynard was getting and my father understood.

He was thankful he didn't have to pay anyone to use his. The item "Al Cass 3x3 Trumpet mouthpiece New / Old Stock all original from the 1940's" is in sale since Sunday, October 6, 2019.

This item is in the category "Musical Instruments & Gear\Brass\Parts & Accessories\Mouthpieces". The seller is "dig-miles" and is located in New Orleans, Louisiana. This item can be shipped worldwide.