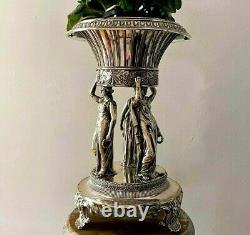 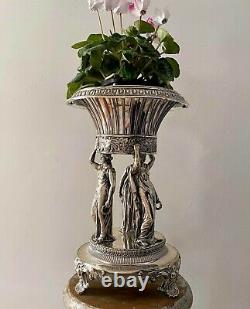 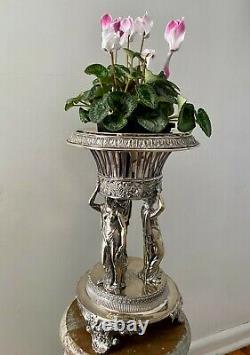 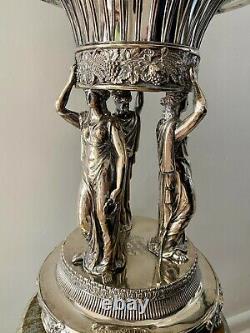 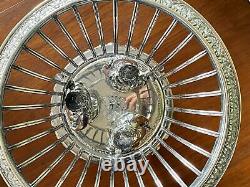 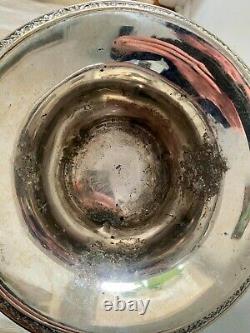 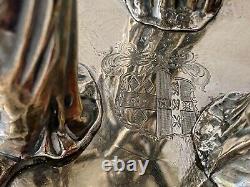 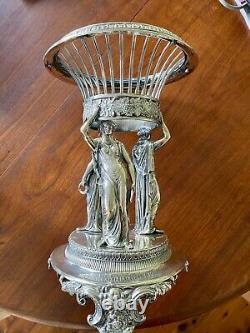 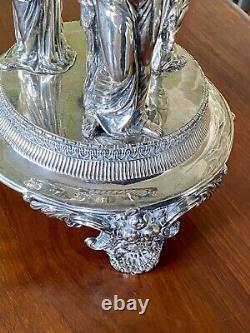 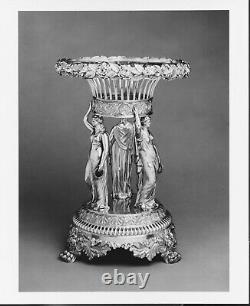 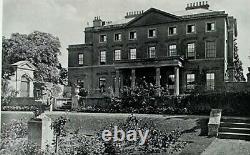 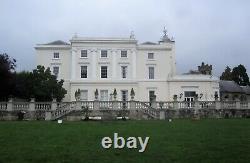 Offering a superb neoclassical regency style silver centrepiece, consisting of a base with three shell-form feet and three supporting caryatids holding laurel wreaths, supporting a wire basket with removable bowl. Hexagonal, six-sided nuts may indicate later manufacture or replacement or repairs. I have been told this looks like Sheffield Plate; if so it is in superb condition for its age. Unusually this has no visible hallmarks, labels or markings. In the style of Paul Storr or Benjamin Smith, the Caryatid supporting figures match a rare Smith example in the MMA, Metropolitan Museum New York (AN: 1993.210) see bio below, and last image. Some old chalky polish residue to nooks and crannies, no wear to surface apart from some scratches, dings, and peeling to the rim and interior of the bowl. 41 cm tall, or 16" 23 wide, or 9".

(Birmingham 1764 - 1823 London). Benjamin Smith started his career working for Matthew Boulton, whose company produced plate, buckles and buttons. Described as button maker in 1794, he moved to London a few years later, in 1802, joining a partnership with his friend and silversmith Digby Scott. He was already manufacturing for Rundell & Bridge, the most well-known luxury retailer of the first half of the 19th Century. From 1807, Smith worked alongside Paul Storr and their designs, after the antique and in the neoclassical style, were often very closely related and difficult to distinguish.

Probably due to his tempered nature, Smith changed partnerships and hallmarks his brother James Smith. Nevertheless, even this partnership was dissolved by 1812, and in 1814, he parted from Rundell.

Soon after, he was in partnership for a short period with his son Benjamin Jr. But he was already independent in 1818. Benjamin received several major commissions and excelled in producing silver tea sets, sugar bowls, trays and salvers, as demonstrated by one of his most significant achievements: the Jamaica Service of 1803, still part of the Royal Collection.

The item "Neoclassical Silver Centerpiece Regency Caryatid Centrepiece Paul Storr Armorial" is in sale since Thursday, June 24, 2021. This item is in the category "Antiques\Silver\Silverplate". The seller is "atticism" and is located in Collaroy, NSW.

This item can be shipped worldwide.